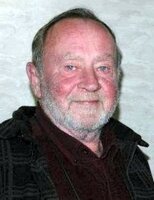 SMITH- Frederick Charles “Fred” of Port Stanley passed away at the St. Thomas-Elgin General Hospital, surrounded by his family, on Monday, May 23, 2022 at the age of 76. Fred is survived by his beloved wife Marion Smith (nee Low); by his daughters Connie (Gary) Beaulieu and Cathy (Mark) Goodhue all of St. Thomas; by his stepchildren Wendy (John) Weiler of Kitchener, Heidi (Ron) Morrison of Baden, and David (Cindy) Stewart of Kitchener; by his grandchildren Brennan and Tyler Beaulieu, Taylor and Kaylie Goodhue, Chris (Summer) Weiler, Brandon Weiler, Brittany, Simone, and Grace Morrison; by his great grandchildren Alba, Nolen, Charlotte, and Ellis; and by his sister Sue Smith. Fred was born in St. Thomas to the late Frederick and Winnifred Smith and brother to the late Shirley Smith. Anyone who knew Fred knew of his passion for cars and fishing. From his early days of owning his own body shop, to working at Woody’s Auto Body then retired as an insurance appraiser, cars were his passion. One of his favourite pastimes was attending the classic cars shows with his ’55 Chev. Cremation has taken place. Visitation will be held at the Shawn Jackson Funeral Home 31 Elgin Street, St. Thomas (519-631-0570) on Friday, May 27, 2022 from 11:00 am – 1:00 pm, where a memorial service to celebrate Fred’s life will be held in the chapel at 1:00 pm. Interment of ashes in Elmdale Memorial Park Cemetery. On behalf of the family, a heartfelt Thank You to the staff at the STEGH ICU for their care and compassion towards Fred. In lieu of flowers, donations to Heart & Stroke or STEGH Foundation would be appreciated. Personal condolences to the family can be made at www.sjfh.ca