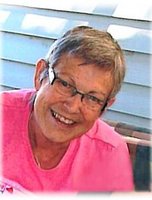 WALTERS - Veronica Louise (nee Lawson) of St. Thomas passed away at LHSC Victoria Hospital on Monday, August 26, 2013 at the age of 68. Beloved wife of Glen Walters. Adored by her children Wade (Carla) Walters of Toronto, Kyle (Rena) Walters of Winnipeg; grandchildren Emma Walters, Lawson Walters, Taylor Walters; siblings Derek (Suzanne) Lawson of Hamilton, Jenefer LaForet of London; brother-in-law Bill Prevost of London; and many wonderful nieces and nephews. Predeceased by her parents Ron and Winifred Lawson, and her sister Lesley Prevost. Veronica was an active member of the Salvation Army Citadel, the Friday afternoon knitting group at the Senior’s Centre, and the Historic Automobile Club of Canada. Though she thoroughly enjoyed her time spent with her friends and activities, Veronica’s life truly revolved around her grandchildren and her family. She will be missed so very much. Family and friends will be received at the Shawn Jackson Funeral Home 31 Elgin Street, St. Thomas (519-631-0570) on Thursday, August 29, 2013 from 2:00 to 4:00 and 7:00 to 9:00pm. There will be a one hour visitation prior to the funeral service at the Salvation Army Citadel 380 Elm Street, St. Thomas on Friday at 11:00am. Cremation to follow. Interment in Elmdale Cemetery at a later date. If desired, donations to the Salvation Army Citadel or LHSC - Dialysis Unit would be appreciated. Visitation Thursday, August 29, 2013 from 2:00 - 4:00 and 7:00 - 9:00 pm. Shawn Jackson Funeral Home Visitation Friday, August 30, 2013 from 10:00 am - 11:00 am. Salvation Army Citadel Funeral Friday, August 30, 2013 at 11:00 am. Salvation Army Citadel Cremation Cremation will take place after the funeral service. Mount Pleasant Cemetery Memorial donations are being accepted in memory of Veronica Louise Walters for :London Health Sciences Centre - Dialysis Salvation Army Citadel Service Information