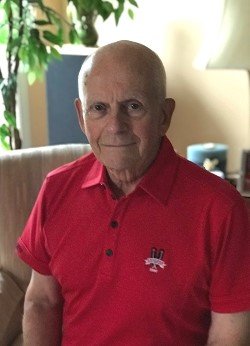 Please share a memory of Arthur to include in a keepsake book for family and friends.
View Tribute Book
CAIRNCROSS- Arthur Roy of St. Thomas, passed away peacefully at home on Monday, December 14, 2020 at the age of 81. Arthur is survived by his beloved wife Beth Cairncross (nee Pittaway); by his loving children Anne (Alex) Hiddink, Linda Cairncross (Don Frizell), Heather (David) Dryfhout, and David (Colleen) Cairncross; by his grandchildren Chelsea, Ellen and Samuel Gray, Luke (Britianey) Basler, Bethany Basler, Matthew Basler, and Jessica and Rachael Dryfhout; by his great grandchildren Rory, Hannah, Hailey and Landon; by his siblings Jim (Roxy) Cairncross and Sally (Brian) Baker; and by his nieces and nephews. Predeceased by his parents James and Margaret Cairncross, his sister Nancy Thomas and by his brother-in-law Donald Pittaway. Arthur began his career as a pharmacist in London, before joining his uncle at Burns Pharmacy in St. Thomas and would eventually sell the Burns Pharmacy to Big V. A few years later, Arthur began a new journey to earn his Masters of Divinity from the Baptist Seminary in London. He soon became a mentor for many people while leading the Men’s Ministry at Faith Baptist in St. Thomas. Arthur also worked at the St. Thomas-Elgin General Hospital as the Director of Pharmacy for 20 years; finishing off his pharmacy career working for Shoppers Drug Mart in a part-time role. Cremation has taken place. A private family service to celebrate Arthur’s life will be held at the Shawn Jackson Funeral Home 31 Elgin Street, St. Thomas (519-631-0570) on Saturday, December 19, 2020 at 1:00 pm. For those who are not able to attend, a live stream of the service will be made available through Arthur’s tribute page on the funeral home website. If desired, donations to the Grace Café, St. Thomas Elgin Food Bank (Caring Cupboard) or the STEGH Foundation would be gratefully acknowledged. Personal condolences to the family can be made at www.sjfh.ca
To plant a beautiful memorial tree in memory of Arthur Cairncross, please visit our Tree Store

A private family service will be held on Saturday, December 19, 2020 at 1:00 pm. The service will be live streamed for those who are unable to attend.
Online Memory & Photo Sharing Event
Online Event
About this Event

Look inside to read what others have shared
Family and friends are coming together online to create a special keepsake. Every memory left on the online obituary will be automatically included in this book.
View Tribute Book
Share Your Memory of
Arthur
Upload Your Memory View All Memories
Be the first to upload a memory!
Share A Memory
Plant a Tree
Admin Login | Website powered by FuneralTech & TA | Privacy Policy | Terms of Use