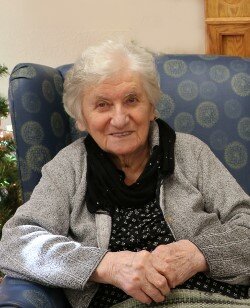 Please share a memory of Caterina to include in a keepsake book for family and friends.
View Tribute Book
SCOMPARIN- Caterina “Rina” (nee Borra) passed away peacefully at Extendicare Port Stanley on Saturday, September 11, 2021 at the age of 94. Beloved wife of the late Sergio Scomparin (2006). Rina is survived by her son Leo of Oakville, her loving daughter Mara (Paul) Nicli of St. Thomas, and by her sisters Maria and Renza in Piemonte, Italy. Predeceased by her brother Luciano and sister Emma. Rina was born in Carrù, Cuneo, Piemonte, Italy to the late Maurizio and Antonietta Borra. She worked in Bern, Switzerland for nine years, where she met Sergio. Rina then came to Toronto to marry Sergio in 1957 and began her career as a seamstress. Upon retirement, Rina moved to their cottage at Jackson’s Point, before eventually moving to St. Thomas, and later spending her final four years at Extendicare in Port Stanley. Rina was an amazing cook and had a love for fine chocolates, and enjoyed cycling well into her 70’s. She will be dearly missed. Visitation will be held at the Shawn Jackson Funeral Home, 31 Elgin Street, St. Thomas (519-631-0570) on Wednesday, September 15, 2021 from 2:00 - 3:00 pm. The funeral service will be held in the chapel at 3:00 pm. Those wishing to attend the funeral service are required to register on Rina’s tribute page on the funeral home website, or by calling the funeral home. Cremation to follow and the interment of ashes will take place in Holy Angels Cemetery on a later date. In lieu of flowers, donations to a charity of one’s choice will be gratefully acknowledged. Personal condolences to the family can be sent to www.sjfh.ca The family would like to thank Doctors, Nurses, Support Staff and residents at Extendicare for their care, compassion and friendship shown to Rina during her time with them.
To send flowers to the family or plant a tree in memory of Caterina Scomparin, please visit Tribute Store
Wednesday
15
September

Look inside to read what others have shared
Family and friends are coming together online to create a special keepsake. Every memory left on the online obituary will be automatically included in this book.
View Tribute Book
Share Your Memory of
Caterina
Upload Your Memory View All Memories
Be the first to upload a memory!
Share A Memory
Send Flowers
Plant a Tree
Admin Login | Website powered by FuneralTech & TA | Privacy Policy | Terms of Use