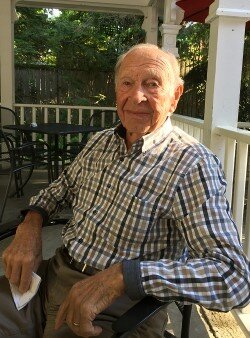 Please share a memory of Ben to include in a keepsake book for family and friends.
View Tribute Book
JENSEN -Bent Erik of St. Thomas, passed away peacefully at the St. Thomas-Elgin General on Thursday, November 11, 2021. Bent, now usually called Ben, was born in Denmark to Kristan Jensen and Astrid Bentsen on August 14, 1926. His older sister Asta predeceased him, and he leaves his much loved brother Aage and sister-in-law Grethe Jensen and their family. Ben, being of the intrepid Viking heritage, set sail for Canada soon after the war and ended up in Calgary, where he learned the art of drywalling and construction and ultimately established his own successful company. Here he married and became the loving father of Doris, Linda (Steve), Nancy (Don), and Michael (Claudia). In 2000 Ben decided to take a Caribbean Cruise and met Ruth Gates, who became his wife and loving partner for the rest of his life. In addition to the growing family of grandchildren and great grandchildren in Alberta: Austin and Tanner, Jeffrey, Stephen and Timothy, Matthew and Karin, Cate, Tanya, Ben became part of the Gates family, with Andy and Carol and their children Zachary and Jonny, and Michael and Ann Gates. Ben and Ruth enjoyed over 20 years together, especially loving their winters spent in Arizona in a golf resort. Golf was a new activity for Ben, who began it at age 73 and it became a great pastime for him and Ruth and friends. His favourite activity, however, was playing his keyboard, playing tunes he composed himself and that he added to the poems that he composed. A life well lived is an apt description of Ben, full of change, adventures, learning a new language, being a successful entrepreneur, a musician, and a well-loved family man. Friends and family will be received at the Shawn Jackson Funeral Home 31 Elgin Street, St. Thomas (519-631-0570) on Wednesday, November 17, 2021 from 2:00-4:00 pm. A private interment of ashes in South Park Cemetery will be held the following day. If desired, donations in memory of Ben to the STEGH Foundation would be appreciated. A Celebration of Ben’s life will also be held next summer in Calgary when all his family members can be together to honour him. The family wishes to acknowledge the caring, professional and compassionate care given to Ben and his family through the St. Thomas Elgin General Hospital.
To send flowers to the family or plant a tree in memory of Ben Jensen, please visit Tribute Store
Wednesday
17
November

Words of remembrance will be spoken at 3:00 pm.
Online Memory & Photo Sharing Event
Online Event
About this Event

Look inside to read what others have shared
Family and friends are coming together online to create a special keepsake. Every memory left on the online obituary will be automatically included in this book.
View Tribute Book
Share Your Memory of
Ben
Upload Your Memory View All Memories
Be the first to upload a memory!
Share A Memory
Send Flowers
Plant a Tree
Admin Login | Website powered by FuneralTech & TA | Privacy Policy | Terms of Use