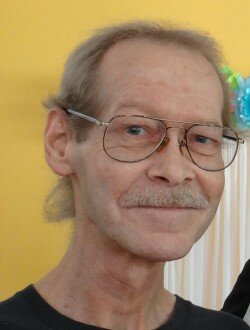 Please share a memory of David to include in a keepsake book for family and friends.
View Tribute Book
NETHERCOTT - David Kerry (aka Koolaid) of St. Thomas passed away peacefully at St. Joseph’s Hospice of London on Tuesday, December 14, 2021 at the age of 63 after a long and courageous battle with cancer. Dave is survived by, and will be lovingly remembered by his mom Marilyn; his brothers James (and his wife Sandra) and John (and his wife Isabelle); his nieces Amanda, Sparrow and Jennifer (and her husband Derek); his great-nephews Keegan, Lochlan and Nolan; numerous cousins, and countless friends. Now reunited with his dad Charles (2018), brother Terry (2010) and his beloved dogs Chewy and Boo. Dave was a lifelong resident of St Thomas. After first gaining local fame by placing second in the 1959 baby contest, Dave attended Locke's Public School and Arthur Voaden Secondary School (occasionally). He then worked for many years as a machinist at Gould, Weatherhead and BrassCraft. But Dave was much more than his cute baby face, his academic achievements or his work. He was first and foremost a great friend, son and brother who had a heart of gold. He was generous with his time, and anything that he had. He loved to have fun, party with friends, watch NASCAR races on the weekends and enjoyed the odd beer or two. He had a great sense of humour and was a master of seeing the funny side of everything, including his fight with cancer. Dave was a huge Dale Earnhart Sr fan and loved imitating his hero either behind the wheel of his '69 Camaro or his PlayStation. Blacklight posters, lava lamps and booming classic rock were a staple at Dave's place. Dave liked things casual, but for those more formal occasions, you could always find him rocking his best Metallica t-shirt. If you wanted to watch an episode of Bonanza, The Waltons or Ancient Aliens, you were always welcome to come over. Dave was musically inclined; he became a Kazoo-ologist before the age of 10. He then taught himself to play the harmonica, the family organ and finally his guitar. Unfortunately, his career as leader of the family band was cut short because his two younger brothers could only sing soprano (and badly). Uncle Dave loved his nieces; they were the highlight of every family gathering, and to him they would always be his little girls. Family get togethers were important to Dave; his Christmas gifts to family were always creative and fun. Dave was truly one of a kind and will be missed by so many. Visitation will be held at the Shawn Jackson Funeral Home, 31 Elgin Street, St. Thomas (519-631-0570) on Friday, December 17, 2021 from 6:00 - 9:00 p.m. A private interment will be held at Elmdale Memorial Park Cemetery. If desired, donations to St. Joseph’s Hospice of London or Canadian Cancer Society would be appreciated. Dave's family would like to extend heartfelt thanks to the care providers from Southwest LHIN and his nurses at St Joseph's Hospice for the wonderful, compassionate care they provided to Dave during the last part of his journey. Personal condolences to the family can be made at www.sjfh.ca
To send flowers to the family or plant a tree in memory of David Nethercott, please visit Tribute Store
Friday
17
December

Look inside to read what others have shared
Family and friends are coming together online to create a special keepsake. Every memory left on the online obituary will be automatically included in this book.
View Tribute Book
Share Your Memory of
David
Upload Your Memory View All Memories
Be the first to upload a memory!
Share A Memory
Send Flowers
Plant a Tree
Admin Login | Website powered by FuneralTech & TA | Privacy Policy | Terms of Use