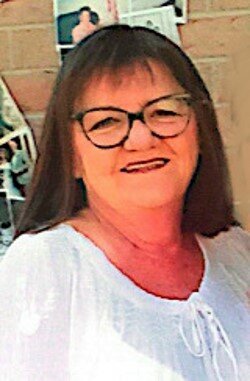 Please share a memory of Wilma to include in a keepsake book for family and friends.
View Tribute Book
VANDER WALLEN, Wilma Mary. It is with great sadness that we said farewell to our sister and aunt, Wilma Vander Wallen on Friday, May 13, 2022, at her home, in her 65th year. Wilma was born in 1957 at the St. Thomas-Elgin General and raised in Port Stanley by Fred and Joan Vander Wallen. She is survived by her siblings Mary Ridgway (Don) of Mitchell, Tina Vander Wallen-Howey (John) of Eden, big brother John Vander Wallen (Cathy) of St. Thomas, Joanne Vander Wallen of Port Stanley, and Fred Vander Wallen of London. Predeceased by her father Fred and mother Joan (March 29, 2022), and by her brother-in-law Ken Ridgway. Wilma is also survived by her many nieces and nephews, who were her world, and whom she referred to as her kids: Jason Taggart (Laura) and their children Nolan and Braedon of Ottawa, Kevin Taggart (Melanie) and their son Brody of Canmore, Alberta, Andrea Taggart of Elmira, Robert Howey (Faith) of Nova Scotia, Benson Howey (Lisa) and their daughter Della of Eden, Hannah Howey (Scott) of Eden, Tyler “Buckaroo” Vander Wallen (Carolina) of Toronto, Lisa Higgs (Travis) and their daughter Meadow of Sparta, Nikki Johnson (Joe) of Port Stanley, and Jocelyn McTaggart (Tom Baines), Sara McTaggart, and their father Scott McTaggart all of Port Stanley. She is also survived by her cousin Wilma (Jon) Berkers and family, her good friend Stephen Lalonde of St. Thomas. Wilma’s lifelong friendships with Maria Cupples (Dick), Heidi Ronald (Terry), and her entire ER and EMS family are something that she cherished greatly. Wilma was very proud of her 40 years of service at STEGH that she dedicated to the Dietary, Linen, and Housekeeping Services from 1976-2016. Wilma will be missed by her extended family and friends Gloria Lawson (Archie) of St. Catharines, Mark (Wendy) Hepburn of St. Thomas, and Roseanne Dewar of St. Thomas. Wilma loved family get togethers, sporting events, especially the PGA, LPGA Tours, the Toronto Maple Leafs, Toronto Blue Jays, and Toronto Marlies that Steve and Wilma spent many weekends travelling in Ontario and the States. She loved Port Stanley and the beach with her kids, and would often be seen at Bingo. Wilma’s family would like to express their endless thank you to Wilma’s health care team, her nurse Kim Lunn, Dr. Eric Grayson, The Team and London Regional Cancer Clinic, and never forgotten John (Nancy) Hofhuis. Cremation has taken place. Visitation will be held at the Shawn Jackson Funeral Home 31 Elgin Street, St. Thomas (519-631-0570) on Tuesday, May 17, 2022 from 2:00-4:00 and 7:00-9:00 pm. A Celebration of Life will be held at the Masonic Centre of Elgin 42703 Fruit Ridge Line, St Thomas on Wednesday, May 18, 2022 at 1:00 pm. A private interment to inter Wilma’s ashes with her parents, will take place in Holy Angels Cemetery on a later date. If desired, donations to STEGH Foundation (ER department) or the London Regional Cancer Centre would be appreciated. Personal condolences to the family can be made at www.sjfh.ca “She was loved and will be dearly missed by her extended family”
To send flowers to the family or plant a tree in memory of Wilma Vander Wallen, please visit Tribute Store
Tuesday
17
May

Look inside to read what others have shared
Family and friends are coming together online to create a special keepsake. Every memory left on the online obituary will be automatically included in this book.
View Tribute Book
Share Your Memory of
Wilma
Upload Your Memory View All Memories
Be the first to upload a memory!
Share A Memory
Send Flowers
Plant a Tree
Admin Login | Website powered by FuneralTech & TA | Privacy Policy | Terms of Use