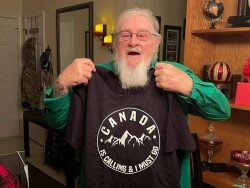 Please share a memory of Leonard to include in a keepsake book for family and friends.
View Tribute Book

Jim Clarke was born in St. John’s, Newfoundland, one of the oldest settlements in Canada, to parents Leonard James Clarke and Edith Cavell Mauro. He migrated to Southern California at age 16 with his mother. After graduating from high school, Jim joined the Marines, serving in both Vietnam and Hawaii. Following his service in the military, Jim worked multiple jobs, including one as a bouncer at Posh Nightclub, where he met his first wife, Suzanne. The two were married in October 1968 at the Little Chapel of the West in Las Vegas, NV and honeymooned in Mexico.  Jim loved muscle cars, especially a 1968 Dodge Charger Super Bee. His son, Jimmy, was born in 1969. After a short move back to Canada, the family relocated to Southern California and welcomed a daughter, Jessica, in 1973.   Dissatisfied with his short time serving as a Soledad prison correctional officer, Jim and family moved to Aromas, where they lived on a farm with many different animals. Jim began driving long haul trucks, while his wife Suzanne joined the fire service. This is where Jim and Suzanne separated and finally divorced.  In the fall of 1979, Jim moved to South Lake Tahoe, CA as a single man. He and his new wife, Diane, were wed at a small chapel there and the couple remained married for 4 years. In the summer of 1986, Jim married Suzy, and they were together until her death in 2017.  During his years in South Lake Tahoe, Jim plowed snow for several entities, then worked with CalTrans and drove the “Big Orange” for 25 years. He was known, lovingly, as Father Time to his CalTrans co-workers.  Once retired, Jim opened a bar named Time Out for Friends in Fernley, Nevada.  Jim is remembered with love by his son, Jimmy Clarke and wife, Crystal, and their three sons: Jasper, Waylon, and Hopper, of Bend, OR; daughter, Jessica Clarke, her spouse Mel of Las Vegas Nevada her kids: Shawndreya, Tasha, Jeremy and August; Diane and her sons Jim and Phil, daughter Dawnetta who preceded him in death;  Suzy’s daughter Sity; his sister Clarice of St. Thomas, Canada and her daughters Marlene, Stephanie, Heather and Sherri; sister, Edith of North Carolina, and her daughters, Victoria and Melissa; Suzanne of Bend Oregon.

To plant a beautiful memorial tree in memory of Leonard Clarke, please visit our Tree Store

Look inside to read what others have shared
Family and friends are coming together online to create a special keepsake. Every memory left on the online obituary will be automatically included in this book.
View Tribute Book
Share Your Memory of
Leonard
Upload Your Memory View All Memories
Be the first to upload a memory!
Share A Memory
Plant a Tree
Admin Login | Website powered by FuneralTech & TA | Privacy Policy | Terms of Use