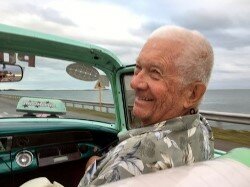 Please share a memory of Charles to include in a keepsake book for family and friends.
View Tribute Book
Charles Lane Fox of St Thomas, passed away peacefully at the St Thomas-Elgin General Hospital with family by his side on Thursday January 13, 2022, at the age of 91. Preceded by his son Roy, Chuck will be remembered by his children Catherine, Lynn, Rob and Paul, his daughters in law Samantha and Suzie, son in law George, and grandchildren Cristin, Ian, Christin, Ryan, Linsay, Corey, Teaghan, Timéa, and Ben. Born in Anyox, BC, Chuck was well traveled and lived a full life. He loved to sail; a passion that he shared with his two younger sons, and led to him becoming a Sea Scout Leader. A butcher by trade Chuck retired from his long-term employment with Loblaws. He then took great pride in the work he did as a driving instructor with the Board of Education. In 1960 (AL 5960), Chuck was initiated by The Grand Lodge of Manitoba were he became a Freemason of The Beaver Lodge No.139. He later became a long standing member of The St Thomas Talbot Lodge No.44 for the remainder of his years. He was a proud Mason, who looked forward to meetings, and was particularly fond of the “fourth degree” at the end with cookies and sweets. Arrangements entrusted to the Shawn Jackson Funeral Home, 31 Elgin Street, St. Thomas (519-631-0570). As per Chuck’s wishes there will be no visitation or services. A Celebration of Life will be held at a later date for family and friends. For those who would like to make a donation in Chuck's memory, please consider CNIB, MADD Canada or Muscular Dystrophy Canada. Personal condolences to the family can be made at www.sjfh.ca
To send flowers to the family or plant a tree in memory of Charles Fox Chuck/Charlie, please visit Tribute Store
Saturday
2
July

Look inside to read what others have shared
Family and friends are coming together online to create a special keepsake. Every memory left on the online obituary will be automatically included in this book.
View Tribute Book
Share Your Memory of
Charles
Upload Your Memory View All Memories
Be the first to upload a memory!
Share A Memory
Send Flowers
Plant a Tree
Admin Login | Website powered by FuneralTech & TA | Privacy Policy | Terms of Use