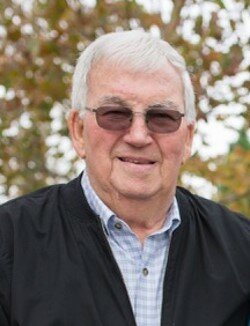 Please share a memory of John to include in a keepsake book for family and friends.
View Tribute Book
It is with great sadness that the family of John (Jack) Gerard Bostwick of St. Thomas announces his passing, which occurred on March 6, 2022. He passed away peacefully, surrounded by his family at London Health Sciences Centre-Victoria Campus. John was born in Saint John, New Brunswick on March 24, 1938, to the late Ottis and Mary Bostwick. He grew up on the family homestead in Wickham. John is survived by his beloved wife of 54 years Kathy (Shaw); by his children Kim Dineen (Shawn) of Edmonton, AB and Martha Bostwick of Lawrencetown, NS; and by his adored grandchildren Keegan, Rylee, and Reese. He is also survived by sisters Peggy (George) MacDonald, Shirley Reicker, and Sandra (David) Gray, brother-in-law Lloyd Mott, and sister-in-law Gwen Bostwick, all of New Brunswick, by his sister and brother-in-law Susanne and Bob Jackson of St. Thomas, and many extended family members. John was predeceased by his parents, an infant son, by his in-laws Trueman and Joyce Shaw, brothers Joe and George Bostwick, sister Geraldine Mott, brothers-in-law George MacDonald, Roland Reicker and Aubrey Johnson, sister-in-law Roma Bostwick, and grandson Kale Dineen. John moved to Ontario in 1962, where he first worked in farming, and then at Canadian Timken. In 1967 he began work as driver and salesman for Shaw’s Ice Cream, where he worked until his retirement. Thank you to the many doctors and nurses who have cared for John over the past few years, both at the STEGH and the thoracic surgery ward of LHSC. Special thanks to Michelle Vader, RRT. Cremation has taken place. Arrangements have been entrusted to the Shawn Jackson Funeral Home 31 Elgin Street, St. Thomas (519-631-0570). A gathering for family and friends to celebrate John’s life will be held on Sunday, July 3, 2022. Further details will be announced closer to the date. If desired, donations to the Lung Association or STEGH Foundation made in John’s memory would be greatly appreciated. Personal condolences to the family can be made at www.sjfh.ca
To send flowers to the family or plant a tree in memory of John Bostwick, please visit Tribute Store
Sunday
3
July

Look inside to read what others have shared
Family and friends are coming together online to create a special keepsake. Every memory left on the online obituary will be automatically included in this book.
View Tribute Book
Share Your Memory of
John
Upload Your Memory View All Memories
Be the first to upload a memory!
Share A Memory
Send Flowers
Plant a Tree
Admin Login | Website powered by FuneralTech & TA | Privacy Policy | Terms of Use